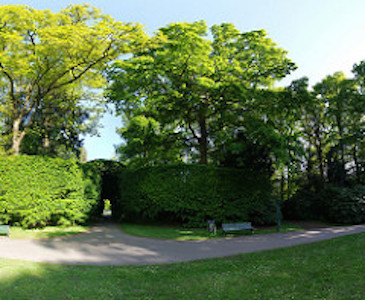 On March 8, 2016, the Cleveland City Planning Commission approved a 25-year plan to halt dramatic losses of the city’s tree canopy, aiming to restore the area to what once was known as “The Forest City.” In rare praise from commission members, the $75,000 plan was approved with commendations.

No one knows for sure why Cleveland became “The Forest City,” but the idea of the city as a highly sophisticated society in a heavily forested environment may have been inspired by the observations of Alexis de Tocqueville in his classic 1835 “Democracy in America.” Many are convinced, however, that William Case, secretary of the Cleveland Horticultural Society and later mayor of the city, played a significant role in advancing the nickname for Cleveland.

Lush Green to Miles of Gray

So dramatic is today’s absence of trees that Cleveland’s city limits as seen from satellites in outer space are defined by bald patches of asphalt and concrete. In fact, land surveys suggest that Cleveland loses 90 acres of urban forest per year from invasive parasites and poor maintenance. The Cuyahoga County Planning Department says Cleveland ranks near the bottom of the county’s 59 communities in its tree canopy percentage. Moreover, with only 19 percent tree coverage, Cleveland ranks seventh behind 10 American cities that include Detroit (23 percent), New York (24 percent), Cincinnati (38 percent), and Pittsburgh (42 percent).

Initially released by Mayor Frank Jackson’s administration last October, the Cleveland Tree Plan, funded by a blend of private and public funding, details a framework and vision for all the work to come. According to the plan, Cleveland must begin by planting 35,000 trees per year. If the city shoots for tree coverage of 40 percent by 2040, it must plant nearly 700,000; to do less is to face a tree coverage of 14 percent by 2040. Following the plan’s approval, a coalition of community organizations will begin implementation, with clear steps for outreach, education, government agencies, property and business owners, and additional funding.

Plant With a Purpose

Property owners in the city and elsewhere are urged to “Plant with a Purpose” by planting and restoring trees to neighborhoods of with high rates of child poverty and unemployed residents. Such steps advance the very real potential of improving air quality and absorbing the water runoff from storms, among other benefits. In fact, the city’s proposed Tree Plan map identifies areas of heat stress where trees would strategically impact the oppressive temperatures of “heat islands,” or areas that see a notable increase in heat during the summer months due to a paucity of trees.

Monetary Benefits Not to Be Ignored